Shimla: green and clean town among the mountains and monkeys 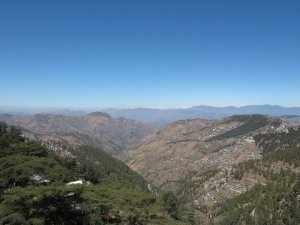 It’s been awhile since my last post but the last week has been super busy! We’ve been staying with Mike’s family in Ludhiana and they’ve been super welcoming – I never knew I could eat as much as we’ve been eating for the last week!

We were able to sneak away from family duties to go to our very first hill station – Shimla! We boarded a bus from Ludhiana to Shimla which took around 6 hours but thankfully, Mike’s cousin Jyotika packed us a tasty picnic basket of puri bhajis, grilled cheese sandwiches and Fanta – mmmm breakfast of champions.  We felt like school children with packed lunch boxes being ushered onto a school bus for a school trip!  The bus ride up the mountain lasted 4 hours and it was so scenic.  There were small towns dotted along the lush green mountainside and cows grazing on farm land that stepped down the mountain.  The roads were curvy and barely wide enough for 2 cars, let alone 2 buses.  Throw in normal Indian driving of swerving and honking and the ride itself was an adventure! Thank god I didn’t get car sick like some of the children on the bus – I had to hold the window shut at times as a vomit splash guard.

We finally arrived at Shimla in one piece (although slightly heavier since we demolished the packed food that was supposed to last the entire day) and set off looking for a place to stay.  What no one told us (or we were too oblivious to notice) was that all the roads in the town are windy and we had to walk uphill to the town above us.  By the time we got to the city center, we were winded and ready to just pick any place to stay.  Thank god we found Hotel Dreamland which not only has clean rooms and a TV but a gorgeous view of the mountains.  People had warned us that it was cold in the mountains but being proud Canadians, we brushed it off with the reasoning that if we can handle -30C Canadian winters, we can handle what they considered “cold”.  Boy were we wrong! Maybe it’s because we had become accustomed to boiling Indian 35+ degree weather but we were freezing – and it was only 15C! At night, we had to wear all our clothes, sleep in the hostel sheets and cover ourselves with thick blankets (and my nose was still frozen).

The plus side was the the high altitude brought along such fresh and clean air! Also, Shimla made such a good effort to be  green.  There were garbage cans everywhere (something I hadn’t seen anywhere in India), pedestrian only roads (so not only no air pollution from the car exhausts but also no noise pollution from the constant beeping horns) and the entire town has been non smoking since last year.  It reminded me of a quaint Swiss town nestled in the Alps except our backdrop was the Himalaya Mountains.  Probably because it was founded as a summer vacation town for the British.  There are mountains in every direction and for miles and miles – truly breathtaking! We watched the sunset from our hotel balcony and it was a sight to see! The sky changed colours with every passing minute with such vivid blues, reds, oranges and purples.  The way the sun set, there were shadows all around it and at times, it cut the sun in half – something I’ve never seen before.

We found a very cute coffee shop that was started as a cooperative by coffee farmers back in the day called the Indian Coffee House.  The coffee was sooo good! Shimla is the state capital of Himachal Pradesh so the coffee shop was packed with government workers on a coffee break.  For dinner, it was so cold outside that I decided on hot & sour soup, hot chocolate and Manchurian chicken just to warm up.  Since Shimla is close to China, the Hakka food was amazing there (for those who don’t know what Hakka food is, it’s a mix of Chinese and Indian food, like spicy Chinese food).

The next day we hiked up the mountain to Jakhu Temple.  The hike was a good 30 minute uphill climb which required some breaks or as we tried to mask them as, photo ops.  There’s a sign at the bottom of the hill that says if you’re under 30, it takes 30 minutes for “absolutely fit” people to go up the mountain so I guess we weren’t that bad although I didn’t feel fit at the top when we were out of breath.  It’s probably a combination of the thinner air (elevation of Shimla is 2200m above sea level) and all the delicious food we’ve been eaten this entire trip.  The temple has a giant statue of Lord Hanuman who was the monkey lord which is exactly what surrounded the temple! There were monkeys everywhere – it was like Alfred Hitchcock’s The Birds but with monkeys.  There were at least 50 monkeys all around the temple grounds, some older, some younger, some fatter and some of them just babies but it was insane! We had to be on guard everywhere we walked because the monkeys are known to attack people.  Using the same calm strategy as Cesar Milan on Dog Whisperer with dogs, I tried to keep my cool but monkeys would claw at my pants and hiss! I would just push Mike in front of them since he has his rabies shots and I don’t.  🙂  We calmly and slowly moved around the monkeys and took some photos before going back down the mountain, which was so much easier than our uphill climb.

The next day, we left Shimla but the main attraction is actually the toy train that connects Shimla to the town of Kalka at the bottom of the mountains (the railway and voyage is actually an UNESCO World Heritage site).  The toy train is really cute, it only has 6 cars which seat only 25-30 people each and an engine that used to be powered by steam until 2 years ago.  Too bad it changed because the engine pumped out exhaust for the entire 7 hour trip which I blew out of my nose for the next day in the form of black snot.  However, the scenery was worth it! The track winds around and even through the mountains – over rock bridges that reached 4 stories in height and through over 100 tunnels.  Passengers would yell as we passed through the tunnels to hear the echoes from the stones.  Some of the turns were 45 degrees so you can see the entire train turning with a sheer vertical drop on the side.  We passed by many other hill station towns, some bigger than others but all with that quaint town feel.  There were children who would wave and run along with the train or men would appear out of nowhere and wait for the train to pass before continuing their journey up the mountains.  I stuck my head out of the window to catch the views of the mountainsides the entire ride – so much so that my neck started to hurt! Although it was a long journey, I was sad when we finally arrived in Kalka on flat ground.

So for the only hill station we visited in India, Shimla was amazing – definitely worth it!

One thought on “Shimla: green and clean town among the mountains and monkeys”