Agra: check another Wonder of the World off my list 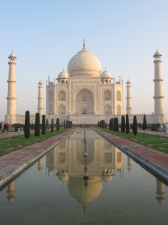 I can’t believe it’s only been a month since we started traveling – as fast paced as India seems, this month seems like it’s gone by so slowly! Mike and I finally got to the Taj Mahal (and as an added bonus, without killing each other)! We took a semi-overnight train to Agra from Khajuraho and arrived 2.5 hrs later than expected at 4AM.  Note: never expect trains in India to arrive on time.

Agra is such a lucky city in that they have so many sights and tourist dollars flowing in – mostly people wanting to see the Taj Mahal but they also have many other UNESCO Word Heritage Sites.  After getting much needed sleep in our very cheap but very clean hotel – Hotel Sidhartha – we went to visit Akhbar’s Tomb.  Akhbar was a Mughal Emperor and Shah Jahan‘s (man who is responsible for the Taj Mahal) grandfather.  He was responsible for building a lot of the great forts and palaces seen in Northern India today.  His tomb was so grand and well thought out.  For example, everything is in perfect symmetry – from the cupolas and gates to the massive lawns surrounding the tomb.  He also built a slope downwards into his tomb so that everyone entering his tomb would be forced to bow their heads which is a sign of respect to royalty.  He was also relatively open to different religions (he had 3 wives: a Christian, a Hindu and a Muslim) so all the inlay work and decorative features on the tomb represent all religions like the 3 of his wives and others like Judaism and Buddhism.  One cool trick is that when you stand on one corner of this domed archway speak into the wall, it’s perfectly transmitted through the acoustics to a person standing on the directly diagonal corner.  Also, the stripes on the  columns and scriptures of the Quran that decorate the archway are all optical illusions in that the writing gets bigger the higher up the tomb so for someone standing at the bottom, all of it looks the same size (Vera, I think you already told me about this but it’s still pretty amazing that they thought of it!).  And as a preview to my African adventure, there were gazelles grazing on the lawn! Apparently the British Lord that started the restoration of the tomb brought them in from Africa.

The day morning, we woke up at 5:15AM to get to the Taj Mahal for sunrise since that’s when the light is the best.  Honestly, I didn’t think I would be amazed when I saw the Taj and thought everyone was over hyping it but boy, was I wrong! I don’t know exactly what it is but it is literally breath-taking.  Maybe it’s the enormity of the building or that it’s made entirely out of white marble or just the way the light highlights the crooks and shadows that makes it such a magnificent sight.  There weren’t that many people there at 6:30AM but there was this one British guy beside us that was narrating his own home movie as if he was David Attenborough for BBC Planet Earth.  Imagine this but in a British accent “The Taj Mahal (pause) at sunrise (pause again), one of the wonders of the world.  Such magnificence (pause), such beauty” then take two and three until we were laughing so hard we had to move along.   The reflecting pool is also a very nice touch and adds a sense of serenity even though the grounds were swarming with camera-happy tourists by then.  Everything in the Taj is made out of white marble, even the floors! And Shah Jahan was so smart and put the Taj on an elevated platform so not only does it stand out but the view of the Yamuna River is unobstructed.  All of the inlay work on the building and the tombs of Shah Jahan and his beloved Mumtaz Mahal are semi-precious jewels and so well preserved and the Taj has the same optical illusions as Akhbar’s tomb as described above.  It was also crazy to see all the Indian guides speaking different languages to tourists like Russian, Mandarin, French etc.

In the afternoon, we were to Agra Fort which is another one of Shah Jahan’s creations.  The irony is that when he was usurped by his own son, Aurangzeb, he was imprisoned at the Fort and wistfully gazed at the Taj Mahal through his prison cell until his death.  The Fort was also very beautiful and massive! There were a lot of nice buildings like mosques, private palaces and the Hall of Public Audience where the Emperor would hear people speak and sometimes hold executions (by elephant trampling – how savage!).  Most of the buildings and the massive wall surrounding the Fort were made out of sandstone so everything had a red tint to it.  Some of the buildings were again decorated with semi-precious jeweled inlays but some also reminded me of old Chinese decorations (imagine pagodas from Crouching Tiger, Hidden Dragon).

After that (yes, it was a productive day), we went by taxi to the town of Fatehpur Sikri one hour away.  There was a huge mosque built there by the Emperor Akhbar to honour a saint who accurately predicted that he would have a son.  The mosque was free so unfortunately, there was garbage and pigeon poop everywhere and for someone who’s deathly scared of pigeon poop (been pooped on 7 times!), it was hard to traipse around it.  There’s also the Palace grounds which contains very interesting buildings like an elephant gateway and a Pachisi court where Akhbar used slaves as playing pieces! After walking around all day, we were all forted out so decided to call it a day.  We were slightly delayed on the way home when we waited 20 minutes at a railway crossing.  People just ignored the barrier and the lights/sounds and would creep underneath with their scooters and bikes.  Also, these kids starting crawling all over our car – felt like zombies from a scary movie :).  Mike and I were just laughing all the way home.

The food situation is still excellent and I was even able to get thali (curry, vegetables, rice, raita and parathas) for 25Rps, that’s 50 cents! Yes, I got the Indian food craving back.  Most of the restaurants in Taj Ganj (the place near the Taj Mahal) offer beautiful roof top views of the Taj  – sticking out behind all the buildings like a sore but beautiful thumb.  Most buildings have very nice rooftops that allows for great photo ops of the crowded neighbourhood.  I even saw a man training pigeons and kept goats on his roof!

Next stop is India’s capital – Delhi!