Mumbai: concrete jungle where Bollywood dreams are made of 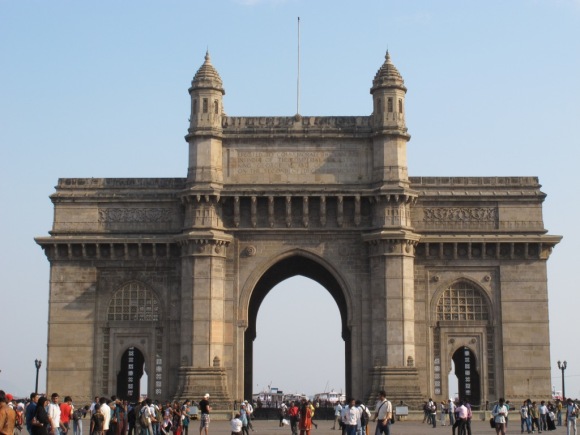 We finally made it to the big city and halfway through our travels without killing each other let alone argue besides the friendly bet here and there on “what time is it?” or “where is the Big Dipper?” So for those who bet that we’d be giving each other the silent treatment by now, sorry to disappoint you.

So where to begin, we left idyllic Goa 3 days ago for the crazy cosmopolitan city better known as Mumbai.  After our uncomfortable (well a least for Mike) train ride, we decided to treat ourselves with a luxury overnight AC sleeper bus.  Boy were we in for a surprise! When we first boarded, we couldn’t stop laughing! Each compartment has 2 beds but each bed is probably only a foot and a half wide and 5’3″‘ in length, side by side with no separation.  Again, for me it was fine (other than the AC water dripping on my arm) but for Mike, it was another story! He spent the night sleeping on his side and trying not to fall out of the upper level compartment where the only barrier between him and the floor 4ft below was a curtain.  On the bright side, imagine we weren’t travelling together and had to sleep like that with a stranger! Also, there was no bathroom on the bus so thankfully we made a pit stop since I was starting to seriously eye the Whiz Easy (thanks Tina and Tom!)

After a restless night, we finally made it to Mumbai and when we arrived, I knew we were now in a different India than we had experienced before. Mumbai is quite unique in that it’s such a modern and progressive city but still with an old world feel.  We noticed immediately that more people were speaking English, adopting western fashion, and embracing pop culture.  We   walked from the bus stop to our hotel 20 minutes away and in that time frame, we learned the art of crossing Mumbai roads.  There are roundabouts everywhere, some without stop lights and for us North Americans with stop lights and signs at every turn, it took some time to figure out that cars would generally slow down for you but still honk in annoyance.  It honestly felt like we were in a game of Frogger! Also, the streets don’t follow a grid and twist/turn through roundabouts so we often thought we were following one street only to realize 10 minutes later that we were on another street going in a completely different direction!

We’re staying at a lovely budget hotel in the  Churchgate area called Chateau Windsor Hotel – sounds classy right? It’s very clean, quiet and a full breakfast (eggs, toast, banana and tea) is only 60 rupees or $1.50! The location is perfect for walking to see the sights without being surrounded by tourists.

For the last 2 days, we’ve taken it easy and slept in since it’s way too hot and humid to go outside before 2pm.  When we do finally leave the comfort of our AC room, we’ve just been strolling around (while mastering jay walking in Mumbai streets – just follow the crowd!),  exploring all the sights in Churchgate, Fort and Colaba.  Some of the buildings like the High Court, University of Mumbai and Elphinstone College are such beautiful Gothic buildings with intricately carved pillars.  We also walked to the water to see the Gateway of India (think Arc de Triomphe but by the water) and the infamous Taj Mahal Palace Hotel.  The funny thing is that they have metal detectors at the entrance for the Gateway but they’re not on so they never go off.  I guess the sense of security is what some people need.  We were considering going  into the Taj but considering that I was wearing a tank top and parachute pants and Mike was wearing a t-shirt and shorts, we didn’t want to pull a Homer Simpson and walk up only to casually turn around and walk away (Stonecutters episode for those who don’t remember).

We’ve also been doing some shopping here since we both brought the wrong clothes to India.  I found a fabulous store called Fabindia on Mahatma Gandhi Road (I swear every city in India has a Mahatma Gandhi or MG Road) which sells hand printed/dyed clothes that won’t look weird if worn back in Toronto.  In addition to traditional saris and kurtas, they also have a wide selection of tunics, dresses and scarves and all at a very reasonable price (bought a beautiful scarf for $10!).  So for those who want to know what clothes to pack for a trip where the temperature goes from cool to boiling hot (i.e. Asia, Africa and Europe in summer), here’s a general list of essentials (mostly for girls):

The food in Mumbai is not as good as we’ve been eating everywhere in India but it might just be that everything is more expensive and my unemployed budget can’t afford better places.  However, there are a couple of standout meals like the Chicken Tikka Masala Pizza at Pizza by the Bay (plus the view of the harbour is so refreshing) and a home cooked meal by Mike’s Uncle Raj and Aunt Geeta.  They were gracious enough to invite us over for dinner at their place in Nariman Point.  They must have thought that we were starving vagrants because we shovelled down soo much food – it was just so tasty and such a change to have home cooked food again.

I should mention that there are a lot of homeless people and slums in Mumbai.  We’ve seen whole families living on the sidewalk in a makeshift shelter cooking food on an open fire while the children do cartwheels for money from passerbys.  It’s very strange to see because Mumbai is probably one of the richest places we’ve been to so far and to see this level of poverty is quite sad.

Tomorrow, we’re taking off for Varanasi – we chickened out on the 30+ hour train ride and bought plane tickets.  I must say that Mumbai is such an interesting city that definitely requires more time to fully explore and embrace its unique way of life so I’m definitely going to be back!